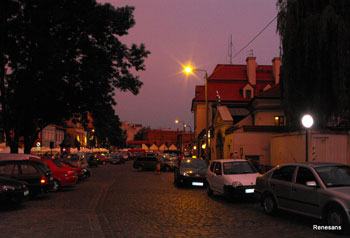 A district of Krakow, once a separate town, Kazimierz was partly inhabited by both Polish Christians and Jews. We offer a tour which will take you through narrow streets, nooks and crannies of Jewish town where the film “Schindler’s List” was made. We visit old synagogues, the Jewish cemetery and look at traces of the Jewish past. Then we cross the Vistula river to the site of the Second World War Jewish Ghetto in Podgórze and finally we take you to see the famous original gate of the Schindler’s factory.

We can also offer also a combined tour around Kazimierz which includes both the Jewish and Polish part of Kazimierz.

Built in 1556-1563, this was among the richest synagogues in the Jewish town in Kazimierz. Its name is associated with the location of the men's prayer room on the first floor.The stone Aaron Hakodesh (Holy Ark enclosing the Torah Scrolls) - the oldest and largest in Poland - stands between two columns and is crowned by a grotesque ornamentation with images of two griffins. 2. Old Synagogue

The oldest building of its type in Poland was most probably built soon after the enforced exodus of Kraków Jews to Kazimierz following the decree of King John Albert (Jan Olbracht) of 1495. The building retained its Gothic character, and was enriched with Renaissance elements including a high parapet wall, windows with semicircular tops, and Tuscan columns in the interior. In the course of the following centuries, the synagogue was repeatedly ravaged by fires and war.After the damage inflicted by the Nazis during the second world war, when even the Gothic vaulting and Renaissance columns were destroyed, a major overhaul was carried out in 1956-1959 to return to the synagogue an element of its former splendour. At the time, the Jewish Religious Congregation entrusted the historical site to the Historical Museum of the City of Kraków to open a permanent exhibition on the History and Culture of Kraków Jews. The Old Synagogue plays this role to this day.

The street is actually an elongated old market square. Standing along its sides are ancient synagogues, a mansion, and dignitaries' houses from the 16th, 17th, and 18th centuries.

Founded in 1620 by Wolf Popper, a tycoon well-known in Europe, was considered the richest and well-equipped synagogue in Kazimierz. During his prayers, Popper used to stand on one leg, hence his nickname Stork ( Bocian ). Nowadays, the synagogue is a cultural centre for children.

Consent to build the synagogue was granted by King Sigismund Augustus (Zygmunt August) himself to the wealthy merchant Isserl ben Josef. It was to be a gift for his son, Moses Isserles, known as Remuh. Remuh held the post of Rabbi of Kraków and rector of the local yeshiva (Talmudic school). The building erected in 1556-the Renaissance character of the synagogue was later lost in unsatisfactory renovations, so that today it is hard to find clearly visible features of that style.

Today, the synagogue is Kraków's only Jewish house of prayer with regular services: on each Friday and Jewish holidays.

Next to the Remuh Synagogue is the cemetery of the same name which is slightly older than the synagogue, as the first burials took place here in 1551. After Kazimierz was merged with Kraków in 1800, the Remuh Cemetery was closed by a decision of the Austrian authorities, very like all of Kraków's church cemeteries which were situated as a rule next to dense residential development. Not only was it quite a bedraggled place before the second world war, with just a few tens of matzevahs, but the Nazis also turned it into a rubbish dump.The cemetery is an attraction to Jews from all over the world because of the grave of Rabbi Moses Isserles (d. 1572).

On the northen side of Szeroka Street the ritual bath building stands at number 6 , the mikveh, whose basin received water from a little spring. The bath must have stood here at least since 1567, as is proved by a record of a tragic accident that occurred here: ten women bathing here were killed when the floor of the bath gave in. Of interest, apart from the healing baths themselves, is the fact that Jewish women were not allowed to take baths outside the mikveh, and the bath attendant was obliged to heat water every Friday.

The Isaac Synagogue, the largest in Kazimierz, is a monumental, strongly elongated construction, equipped with buttresses. The only feature of a particular style in its exterior is the baroque entry portal in ul. Izaaka. In 1924, the front façade received a twin staircase with an arcaded porch leading to the women's gallery, commonly known as the babiniec. In 2007, the Jewish Religious Congregation leased the synagogue to one of the Hassidic communities, who plan to use it for worship.

Construction of Kupa Synagogue was completed in the 1640s. The not very imposing building takes its name from the Hebrew, and is derived from the word kupah meaning money, as the construction was paid for from the money of the Kehila, i.e. the authorities of the Jewish community.The later changes stripped the synagogue of it's characteristic baroque features, while the devastation dealt by the Nazis irreparably destroyed its liturgical character. The only element to be preserved from the time of its construction is the stone Aaron Hakodesh framed between pilasters.

After the city of Kazimierz was incorporated into Kraków in 1800, the Austrian authorities forced the closure of the old Jewish cemetery in ul. Szeroka. The cemetery was expanded three times in the 19th century, with the last expansion taking place in 1899. Today's cemetery covers an area of 19 ha (47 acres) and comprises approximately 10,000 tombs, with the oldest one dating to 1809. It is the resting place of the most famous Kraków Jews from the 19th century to this day. Worth mentioning are the painter Maurycy Gottlieb (d. 1879).

The name tempel refers to a synagogue and was used as a quite general reference to a number of synagogues erected in Europe.They were established by progressive Jews who moved away from the Orthodox movement from the 18th century onwards; these were the so-called maskilim, i.e. enlightened ones. The Kraków synagogue was built in 1860-1862 in an arcaded style to the design of Ignacy Hercok.During the second world war, the synagogue was turned into a warehouse, yet unlike the other synagogues, its interior was not seriously damaged. After 1945, Tempel was the only synagogue to be earmarked for religious purposes apart from Remuh.Today in fact, the place only comes to life during the events accompanying the annual Jewish Culture Festival.